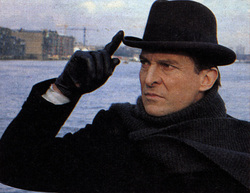 Although in his methods of thought he was the neatest and most methodical of mankind ... [he] keeps his cigars in the coal-scuttle, his tobacco in the toe end of a Persian slipper, and his unanswered correspondence transfixed by a jack-knife into the very centre of his wooden mantelpiece ... He had a horror of destroying documents.... Thus month after month his papers accumulated, until every corner of the room was stacked with bundles of manuscript which were on no account to be burned, and which could not be put away save by their owner.
What appears to others as chaos, however, is to Holmes a wealth of useful information. Throughout the stories, Holmes would dive into his apparent mess of random papers and artefacts to retrieve precisely the specific document or eclectic item he was looking for.

Watson frequently makes note of Holmes's erratic eating habits. The detective is often described as starving himself at times of intense intellectual activity, such as during "The Adventure of the Norwood Builder", wherein, according to Watson:

[Holmes] had no breakfast for himself, for it was one of his peculiarities that in his more intense moments he would permit himself no food, and I have known him to presume upon his iron strength until he has fainted from pure inanition.
His chronicler does not consider Holmes's habitual use of a pipe, or his less frequent use of cigarettes and cigars, a vice. Even so, it is obvious that Watson has stricter limits than Holmes, and occasionally berated Holmes for creating a "poisonous atmosphere" of tobacco smoke. Holmes himself references Watson's moderation in "The Adventure of the Devil's Foot", saying, "I think, Watson, that I shall resume that course of tobacco-poisoning which you have so often and so justly condemned".

Nor does Watson condemn Holmes's willingness to bend the truth or break the law on behalf of a client (e.g., lying to the police, concealing evidence or breaking into houses) when he feels it morally justifiable. However, Watson did not condone Holmes's plans when they manipulated innocent people, such as when he toyed with a young woman's heart in "The Adventure of Charles Augustus Milverton" although it was done with noble intentions to save many other young women from the clutches of the villainous Milverton.

Holmes is portrayed as a patriot acting on behalf of the government in matters of national security in a number of stories. He also carries out counter-intelligence work in His Last Bow, set at the beginning of World War I. As shooting practice, the detective adorned the wall of his Baker Street lodgings with "VR" (Victoria Regina) in bullet pocks made by his pistol.

Holmes has an ego that at times borders on arrogant, albeit with justification; he draws pleasure from baffling police inspectors with his superior deductions. He does not seek fame, however, and is usually content to allow the police to take public credit for his work. It is often only when Watson publishes his stories that Holmes's role in the case becomes apparent. Because of newspaper articles and Watson's stories, however, Holmes is well known as a detective, and many clients ask for his help instead of or alongside the police.

Holmes is pleased when he is recognised for having superior skills and responds to flattery, as Watson remarks, as a girl does to comments upon her beauty.

Holmes's demeanour is presented as dispassionate and cold. Yet when in the midst of an adventure, Holmes can sparkle with remarkable passion. He has a flair for showmanship and will prepare elaborate traps to capture and expose a culprit, often to impress Watson or one of the Scotland Yard inspectors.

Holmes is a loner and does not strive to make friends, although he values those that he has, and none higher than Watson. He attributes his solitary ways to his particular interests and his mopey disposition. In The Adventure of the Gloria Scott, he tells Watson that during two years at college, he made only one friend, Victor Trevor. Holmes says, "I was never a very sociable fellow, Watson, always rather fond of moping in my rooms and working out my own little methods of thought, so that I never mixed much with the men of my year;... my line of study was quite distinct from that of the other fellows, so that we had no points of contact at all". He is similarly described in A Study in Scarlet as difficult to draw out by young Stamford.

Holmes occasionally uses addictive drugs, especially when lacking stimulating cases. He believes the use of cocaine stimulates his brain when it is not in use. He is a habitual user of cocaine, which he injects in a seven-per-cent solution using a special syringe that he keeps in a leather case. Holmes is also an occasional user of morphine but expressed strong disapproval on visiting an opium den. These drugs were legal in late 19th-century England. Both Watson and Holmes are serial tobacco users, including cigarettes, cigars, and pipes. Holmes is an expert at identifying tobacco-ash residues, having penned a monograph on the subject.

Dr. Watson strongly disapproves of his friend's cocaine habit, describing it as the detective's "only vice" and expressing concern over its possible effect on Holmes's mental health and superior intellect. In later stories, Watson claims to have "weaned" Holmes off drugs. Even so, according to his doctor friend, Holmes remains an addict whose habit is "not dead, but merely sleeping".
Powered by