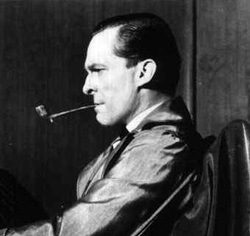 Sir Rthur Conan Doyle hardly reveals any personal details about Holmes but thanks to incidential detailes we know he was born on 6 January 1854.Holmes states that he first developed his methods of deduction while an undergraduate. His earliest cases, which he pursued as an amateur, came from fellow university students.According to Holmes, it was an encounter with the father of one of his classmates that led him to take up detection as a profession, and he spent the six years following university working as a consulting detective, before financial difficulties led him to take Watson as a roommate, at which point the narrative of the stories begins.

From 1881, Holmes was described as having lodgings at 221B, Baker Street, London, from where he runs his consulting detective service. 221B is an apartment up 17 steps, stated in an early manuscript to be at the "upper end" of the road. Until the arrival of Dr. Watson, Holmes worked alone, only occasionally employing agents from the city's underclass, including a host of informants and a group of street children he calls "the Baker Street Irregulars". The Irregulars appear in three stories: "A Study in Scarlet," "The Sign of the Four," and "The Adventure of the Crooked Man".
Little is said of Holmes's family. His parents were unmentioned in the stories and he merely states that his ancestors were "country squires".
Powered by