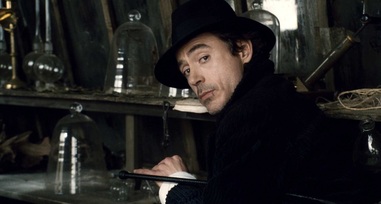 The film was directed by Guy Ritchie and produced by Joel Silver, Lionel Wigram, Susan Downey and Dan Lin. The screenplay by Michael Robert Johnson, Anthony Peckham and Simon Kinberg was developed from a story by Lionel Wigram and Michael Robert Johnson. Robert Downey, Jr. and Jude Law portray Sherlock Holmes and Dr. John Watson respectively. In the film, Holmes and his companion Watson, with aid from former adversary Irene Adler, investigate a series of murders connected to occult rituals. Mark Strong plays the villain Lord Blackwood, who has somehow returned after his execution with a plot to take over the British Empire using an arsenal of dark arts and new technologies.

The film went on general release in the United States on 25 December 2009, and on 26 December 2009 in the UK, Ireland, and the Pacific, and was met with a moderately positive critical reaction.The film was nominated for two Academy Awards, Best Original Score and Best Art Direction, which it lost to Up and Avatar, respectively.

A sequel, Sherlock Holmes: A Game of Shadows, was released on 16 December 2011.

Sherlock Holmes: A Game of Shadows is a 2011 British–American action mystery film directed by Guy Ritchie and produced by Joel Silver, Lionel Wigram, Susan Downey and Dan Lin. It is a sequel to the 2009 film Sherlock Holmes, based on the titular character created by Sir Arthur Conan Doyle. The screenplay is written by Kieran Mulroney and Michele Mulroney. Robert Downey, Jr. and Jude Law reprise their roles as Sherlock Holmes and Dr. John Watson and were joined by Noomi Rapace as Simza and Jared Harris as Professor Moriarty.

Holmes and Watson join forces to outwit and bring down their most cunning adversary, Professor James Moriarty. Although influenced by Conan Doyle's short story "The Final Problem", the film follows an original story and is not a strict adaptation.

Sherlock Holmes: A Game of Shadows, despite receiving generally mixed reviews from critics,was commercially successful with a worldwide gross of over $543 million.
Powered by