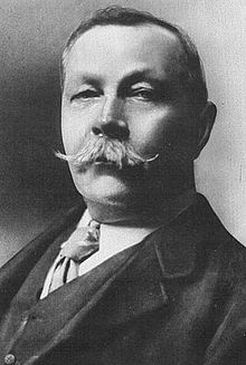 Arthur Conan Doyle was born on 22 May 1859 at 11 Picardy Place, Edinburgh, Scotland. His father, Charles Altamont Doyle, was English of Irish descent, and his mother, born Mary Foley, was Irish. They married in 1855.In 1864 the family dispersed due to Charles's growing alcoholism and the children were temporarily housed across Edinburgh. In 1867, the family came together again and lived in the squalid tenement flats at 3 Sciennes Place.

Supported by wealthy uncles, Conan Doyle was sent to the Roman Catholic Jesuit preparatory school Hodder Place, Stonyhurst, at the age of nine (1868-1870). He then went on to Stonyhurst College until 1875. From 1875 to 1876, he was educated at the Jesuit school Stella Matutina in Feldkirch, Austria.

From 1876 to 1881, he studied medicine at the University of Edinburgh, including a period working in the town of Aston (now a district of Birmingham) and in Sheffield, as well as in Shropshire at Ruyton-XI-Towns.While studying, Conan Doyle began writing short stories. His earliest extant fiction, "The Haunted Grange of Goresthorpe", was unsuccessfully submitted to Blackwood's Magazine. His first published piece "The Mystery of Sasassa Valley", a story set in South Africa, was printed in Chambers's Edinburgh Journal on 6 September 1879. On 20 September 1879, he published his first non-fictional article, "Gelsemium as a Poison" in the British Medical Journal.

Following his term at university, Conan Doyle was employed as a doctor on the Greenland whaler Hope of Peterhead, in 1880, and, after his graduation, as a ship's surgeon on the SS Mayumba during a voyage to the West African coast, in 1881.He completed his doctorate on the subject of tabes dorsalis in 1885.
Doyle's father died in 1893, in the Crichton Royal, Dumfries, after many years of psychiatric illness.

Conan Doyle was found clutching his chest in the hall of Windlesham Manor, his house in Crowborough, East Sussex, on 7 July 1930. He died of a heart attack at the age of 71. His last words were directed toward his wife: "You are wonderful." At the time of his death, there was some controversy concerning his burial place, as he was avowedly not a Christian, considering himself a Spiritualist. He was first buried on 11 July 1930 in Windlesham rose garden. He was later reinterred together with his wife in Minstead churchyard in the New Forest, Hampshire.Carved wooden tablets to his memory and to the memory of his wife are held privately and are inaccessible to the public. That inscription reads, "Blade straight / Steel true / Arthur Conan Doyle / Born May 22nd 1859 / Passed On 7th July 1930." The epitaph on his gravestone in the churchyard reads, in part: "Steel true/Blade straight/Arthur Conan Doyle/Knight/Patriot, Physician, and man of letters".

Undershaw, the home near Hindhead, Haslemere, south of London, that Arthur Conan Doyle had built and lived in between October 1897 and September 1907,was a hotel and restaurant from 1924 until 2004. It was then bought by a developer and stood empty while conservationists and Conan Doyle fans fought to preserve it.In 2012 the High Court ruled that the redevelopment permission be quashed because proper procedure had not been followed.

A statue honours Conan Doyle at Crowborough Cross in Crowborough, where he lived for 23 years. There is also a statue of Sherlock Holmes in Picardy Place, Edinburgh, close to the house where Conan Doyle was born.
Powered by